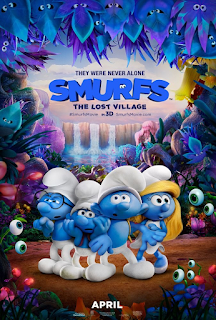 Blue Ain’t Your Color sings Keith Urban;  he obviously don’t know Smurf.  Not having seen Smurf I or II, I was at a complete disadvantage to other reviewers who apparently universally hated them. Nor did I intend to see this movie but when my granddaughter wanted to see it, I wanted to see it. I’m glad I did.

Smurf III brings the Smurfs into the 21st century.  All this time, Smurfette has been the only girl, inexplicably so.  While the names of the other Smurfs explain their identity, Smurfette felt she had none, other than being a girl.  (Even the boy Smurfs knew you can’t define a woman but Smurfette needed to figure this out on her own.).  As she is exploring the Forbidden Forest, Smurfette determines there are other Smurfs who must be protected from the evil Gargamel.  Imagine her surprise when they all turn out to be girl Smurfs.

Youngsters will love the colors and characters of this movie.  The forest and river remind one a little of Pandora.  There are cool dragonflies and glow-in-the-dark bunnies. I really enjoyed the music at the end of the movie.

Mandy Patinkin as Papa Smurf and Julia Roberts as Willow Smurf, leaders of the boys and girls, add a special touch to this movie. Brainy, Hefty, Clumsy, and Stormy are other characters your young ones will be talking about.

This is not like a Disney or Pixar movie that is designed for kids and adults.  Its target audience is young kids. For that, it serves its purpose well. It will hold their attention and clearly shows girl power.  Blue is Smurfette’s color and it suits her well.  Now that she finally has girl friends, it will be interesting to see where this franchise heads.