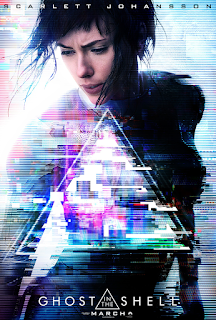 In the first few minutes of Ghost in the Shell, you understand it roughly translates to “soul under the skin.”  The Major, played by Scarlett Johansson, was told her brain survived a horrendous attack and she now has a scientifically enhanced body. She is assigned to an anti-terrorist unit to bring justice to the world. And, as in every movie of this type, she is the brainchild of an evil corporation doing work for the government.  And, guess what?  The evil corporation may have lied to her.

Ghost in the Shell is yet another remake. It is based upon a 1995 Japanese anime film and it comes with a lot of baggage. Like the Great Wall, the decision to use Ms. Johansson was met with near unanimous derision. Even though the critics acknowledge that the movie doesn’t get made without her, you can see that the controversy creeps into their ratings.

As in other movies of this ilk, I am not a fan of the constant dark. It is only in the last few minutes (apparently when good has conquered evil) that we are allowed to see the light.  The computer-created city was not convincing at all.  The computer graphics used to “enhance” the body have been done before, and much better.  Overall, the movie plodded along as the Major tried to discover her real past.  Haven’t we seen this before?

Johansson has shown that she can make a believable action hero, although the body suit seemed a stretch, pun intended. Michael Pitt was effective as the “evil” assassin.  Takeshi Katano, as the Major’s boss, needed a much bigger part.  Juliette Binoche’s character, the not-so-mad scientist, needs more background.

This movie has been out several weeks and you can see that it was low on my totem pole.  Likewise, it should be low on your to-do list.  Enjoy the spring.  If you must, see this movie some dark and stormy night. That’s about what this movie deserves.