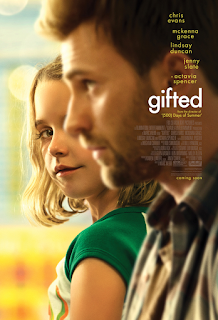 If ever a movie was misnamed, it was probably Gifted.  While I am certain that educators have many, many, varied definitions of “gifted,” the name conjures up visions of well above average, i.e., very smart.  This child is more in the genius category than mere gifted.  Further, reminiscent of Kramer vs Kramer, this movie might have been entitled Adler vs Adler as it is really a “custody” movie.

Frank Adler (Chris Evans) had “adjusted” to life rather well until his sister leaves her one and one-half year old daughter (McKenna Grace) on his couch.  Ill-equipped to raise a young child, he intends to turn the child over to foster parents, but life gets in the way.  Life, in the wonderful form of the child named Mary Adler.  The movie begins by showing Frank’s new life with Mary as a 8 year old math genius about to enter public school.

The movie explores lots of interesting issues.  What is the best way to raise this type of child?  Frank wants her to be “normal,” while Grandma Evelyn Adler (Lindsay Duncan) wants her to study with “old bearded Russians.”  Why did Frank’s sister leave the child with him rather than the father, or grandmother?  What happened to the sister and why?  What will the Judge do given the choice between the wealthy grandmother and the no-health-insurance boat mechanic?  How does the genius child relate to other children?

Chris Evans gives a nice performance in a rare non-action role.  McKenna Grace appears as if she has been acting all her life (she will soon turn 11). Octavia Spencer, as Frank’s neighbor, is always a treat to watch although they don’t give her much to do.   I’m not much of a cat person but I even liked Fred the one-eyed cat!

As I said, the movie does have an air of familiarity about it, especially the emotions surrounding the conclusion of the custody battle. I would have preferred this movie to focus more on the “gifted” and less on the “custody.”  Nonetheless, the interaction between Frank and Mary is special and makes this movie worth your time.