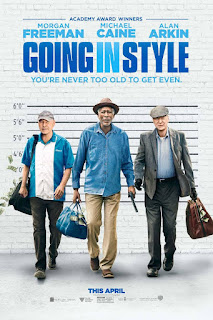 If you think you’ve seen this movie before, you may have, if you are over 60.  This movie was made in 1979 starring George Burns, Art Carney and Lee Strasberg.  No one seems to know why they thought it was a good idea for a re-make. But, there is a reason they keep making buddy movies; it’s because they work.  Michael Caine, Morgan Freeman and Alan Arkin are great actors and help make up for the weak parts of the script. It’s difficult to believe that this cast will entice those under 40 to give it a try, but it was a nostalgic time for those of us slightly older.

The premise of the movie is that the three have lost their pension due to corporate shenanigans and their bank is complicit.  After observing a bank robbery, Caine convinces his two cohorts that they can successfully pull off a heist and get their money back. Their practice run does not go well and the movie gets better as they obtain “professional help.”

The movie is also assisted by a large number of other wonderful cast members.  Ann-Margret is terrific as the girl trying to get Arkin’s attention.  Matt Dillon is as clueless as ever as the FBI agent chasing the robbers.  Kenan Thompson is always fun to watch; in this movie he tries to help the FBI.
Christopher Lloyd (Back to the Future) is completely goofy and the movie could have used more of him.

Since the other major movie out this week is the Smurfs, perhaps the thinking was to send the kids to see the blue animated characters while the adults go see the old folks.  I guess the teens and young adults are on Spring vacation so they are not going to movies this week anyway.  Or, I am sure they are studying hard for their upcoming finals.  All in all, the movie is not as good as the quality shows on cable TV but better than most of the shows on network TV.  I had fun, but then again I am of a certain age.