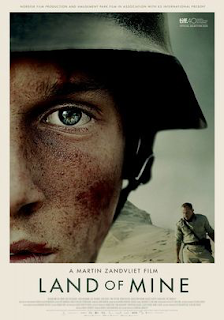 Dilemma (which until today I thought was spelled dilemna) — Do I see Wilson starring hometown boy-makes-good Woody Harrelson which has only a 39% Rotten Tomatoes rating? By the way, I thought he was very good in the recently released Edge of Seventeen.  Or do I see Land of Mine (an 89% Rotten Tomato rating) involving the post-WWII removal of land mines which critics warn you that not all is going to end well? Do I really want to see body parts on a Sunday afternoon?

By the Post, you can see that the higher rated movie won out.
Land of Mine was the Danish entry for the Oscar category of Best Foreign Picture.  It presents the ultimate Dilemma.  The Nazis have overrun your country for the last five years.  They have placed 2 million land mines on your coastlines to repel any invasion attempts.  Who better to do the dangerous removal than German POW’s?  You are to be the supervisor of these men and you hate the Nazis.  Except they send you German boys. And they don’t send food.

Although this is not a true story, it is based upon events after the war when 2000 Germans were required to remove mines from Danish land.  Half were either killed or seriously wounded.  Although this movie mostly sanitized the loss of limbs, it does not sanitize the loss of life.  The mines always blow up at unexpected times with tragic consequences.

Roland Moller was perfectly cast as the bitter, vengeance-seeking sergeant who ultimately has a change of heart. Louis Hofmann was just as good as the “leader” of the boys.  As Moller’s boss, Mikkel Felsgaard looked so innocent but was without conscience.

If you don’t like subtitles, then you will want to avoid this movie.  Perhaps I was always bracing myself for explosions, but I didn’t feel the constant tension I was expecting.  But, as a character study in dealing with the enemy, the film is thought provoking.  It is not as good as the Hurt Locker, but
worthwhile.