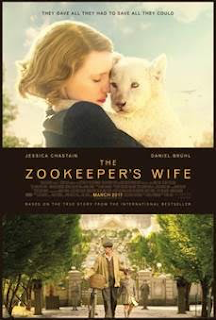 Mrs. TMJ read this book some years ago and was excited to see it made into a movie. As was I. Imagine my surprise when I determined no major theaters in this area were showing the movie. So, off to the Mariemont we go!  Great popcorn at the Mariemont and about 20 steps to Graeter’s. Moviegoing at its best.  But, I digress.

A Zookeeper’s Wife is a powerful story, told disjointedly.  The story (not the movie) is every bit as good as that of Schindler’s List but only at the end of the movie does it ever approach the emotion of Schindler.  In this case, a Polish couple run a zoo in Warsaw just before the start of WWII. From all appearances it was an idyllic life. Then, from September 1939 to the end of the war, the zoo becomes a pig farm and 300 Jews are rescued from the ghetto under the noses of the Nazis.  While some cinematic license occurred during the making of the movie (as generally happens), the basic facts are true.

Jessica Chastain is the star and the only American actor in the movie.  Someone advised her to attempt a Polish accent and it was bad advice.  I found it distracting.   I thought she did a great job in Miss Sloane, but less so here.  Both Johan Helderbergh as her husband, and Daniel Bruhl as the Nazi SS officer were better cast.  But likely the movie doesn’t get made without a star of Chastain’s quality.

Since the name of the movie is the Zookeeper’s Wife, one would reasonably expect the movie to focus on the wife.  But, as edited, the story of the husband and the survivors seemed much more interesting.  However, those story lines were either ignored or not developed.  Perhaps I should have read the book.

In any case, this is a worthwhile movie but it could have been, should have been, much, much better.
If you have nothing better to do on a rainy, miserable day, then by all means go see it.  Otherwise, I would wait for Netflix.