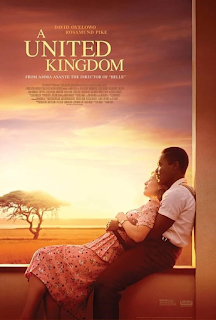 A United Kingdom is shown in the previews as a love story, or perhaps, a story of discrimination against interracial marriage. But it is much more. It is a story of Great Britain’s treatment, rather mistreatment, of its protectorate , now known as Botswana.  Hollywood: Fact vs Fiction tells us it is a largely accurate portrayal of the events leading to the independence of Botswana. As history, it is fascinating. Given these events occurred in the 1950’s, the role of South Africa in this matter was especially enlightening, frighteningly so. You might also be interested to learn that this marriage was the subject of a 1990 movie called A Marriage of Inconvenience.

David Oyelowo (Seretse Khama) plays an earnest potential chief (king) much like he did as Martin Luther King Jr. in Selma.  Rosamund Pike is his wife, who underestimates how difficult the journey was to become. Jack Davenport and Tom Felton are wonderful as the British “we’re from the government and we’re here to help you” bad guys.  Terry Pheto as Khama’s younger sister has a great screen presence.

Khama might have become King in 1952 if he had not married, or later divorced, his white wife. Imagine the choice of being King or giving up the love of your life.  Imagine giving up your kingdom because you understand that your country has to become a democracy to survive.  Most countries fight civil wars over those issues.  Imagine fighting a public relations war against the British Empire and, none other than Winston Churchill.

I’ve stated before that I am a sucker for a true story and it again applies here.  Other than knowing that “the sun never sets on the British Empire,” I knew nothing of Botswana.  While one movie does not an expert make, this is a clear example of how films can educate and increase awareness.  It certainly made me more interested in this part of Africa.  Folks, this is a quality movie and I highly recommend it.  We all need to know more about our world, and, spoiler alert, it has a happy ending!