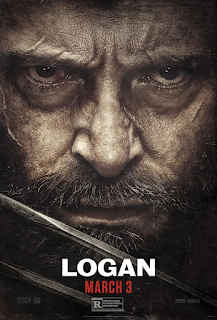 Should this movie have been entitled X-Men: The Next Generation?  As I hinted yesterday, I find Batman to be too dark and limited (Are there no other locations than Gotham City?) and I find Superman to be too repetitive (I mean how many times do we have to see Krypton blow up?).  Logan has taken a page from Star Trek and as the characters age, it is time to move on to the young kids.   And this is not a flashback as presented in X-Men: First Class, this appears to be a new generation of
mutants albeit with similar powers.

Like Sean Connery as James Bond, it is hard to imagine anyone but Hugh Jackman as Wolverine.  So Logan solves that problem by introducing unknown young female Dafne Keen to be the next Wolverine.  And with the passing of Patrick Stewart, who will be the next Charles, the conscience of the X-Men?  This movie sets up the passing of the torch so well that X-Men fanatics will be be guessing “what’s next?” until the next movie appears.

In Logan, a drunken Wolverine is trying to protect Professor X and another mutant from discovery and elimination when Laura (his daughter?) appears being hunted down by the evil doctor and his henchmen.  As always, Wolverine is reluctant to get involved, but eventually realizes he must protect her and other young mutants and deliver them to safety.  While there is much slashing and gore, the story is much more character-driven than most comic book movies.  I am not sure this is “the best of its genre in the last decade” as one critic put it, but it is well done by establishing an ending for this group and blazing a trail for the next.  If you liked any of the previous X-Men/Wolverine movies, you will like this one.  (And, it was nice to again see Eriq La Salle in the movie who Had not been on my radar since the TV show ER.)

Make sure you get to this movie to see the Deadpool trailer.  If you have read my past posts, you know I LOVED Deadpool.  Right before Logan starts, Ryan Reynolds does a spoof of Superman in a telephone booth that is hilarious.  It was almost worth the price of admission by itself.

I went to the Dolby Cinema at West Chester. I suggest there can be too much Dolby.  After 25 minutes of previews where each had to vibrate the house down to show how exciting it would be, I was glad for some relief from blaring noise and non-stop vibration.  Fair warning to all!