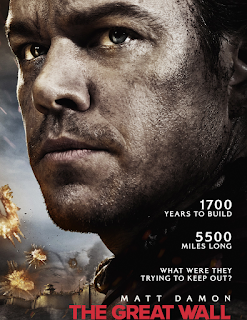 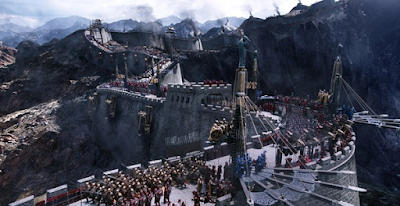 Seeing the real Great Wall is on my bucket list so imagine my disappointment to learn that this Great Wall came with computer generated beasts.  Zillions of computer generated beasts. (Although I must admit that the opening of the eye of one of the beasts reminded me fondly of the eye of the dinosaur in Jurassic Park.) So I approached this movie with very low expectations.  Ahhh! The miracle of low expectations perhaps set the bar so low that, like Mikey in the Life cereal commercial, “He likes it!  He likes It! Mikey likes it!”  I liked it so much that I gave you a second picture.

The Great Wall follows William (Matt Damon-very hunky for the ladies) and Pero (Pedro Pascal-very funny for the guys) as they try to steal black powder from the Chinese.  They are caught at The Great Wall just in time to join into the once-every-60 year attack of the beasts.  From that point, they get to witness Crouching Tiger, Hidden Dragon acrobatics as they also learn that some Chinese ways are better than those of Western Europe.  The female Commander and the Strategist seemed straight out of a hundred other Chinese movies, but if the Chinese want to portray their heroes in that fashion who am I to suggest otherwise.  The critics are brutal in their attacks on alleged cultural insensitivity, but I wonder when any of them ever tried to finance a movie to be shown in China and the U.S.  It’s easy to be critical when its someone else’s money.

Once again, I caution that this is not a movie for everyone, but I found it to be fun.  One can just sit back and enjoy the Wall and beautiful scenery (see above picture).  The costumes were unexpectedly colorful–women in blue and men in red.  Just relax and watch the special effects, beasts notwithstanding.

This movie cost $135-$150 million to make; it has already made $200 million overseas.  I am not sure how it will be received by audiences here but it gets my vote, somewhat surprisingly.  Perhaps I was prejudiced by the Chinese name of the beasts–Tao Ties.  As many of you may know TMJ’s initials are TAO.  Perhaps I found kindred spirits!