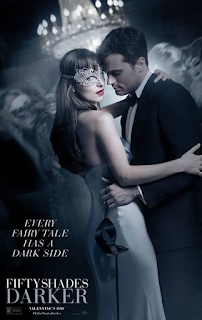 There was probably a reason that Dakota Johnson was chosen to play Anastasia Steele and Jamie Dornan was chosen to play Christian Grey as neither were exactly household names.  Did none of the more well known actors want the part?  Was it because the writing in the book was so bad that they knew it could not be saved?  I will give Ms. Johnson and Mr. Dornan the benefit of the doubt and hope that their acting would be better if given better lines.  Maybe the grimaces on their faces are from the realization that the critics are about to lambaste them.

On a different note, this movie was shot at the same time as Fifty Shades Freed,  and “Freed” will be released, you guessed it, next Valentine’s Day weekend.  Since this movie has already made $145 million on a budget of $55 million, expect more copycats.  Hopefully they will hire better writers.

Not much more to say about this movie.  If you want to be entertained, read some of the critical reviews of this movie.  They are HARSH!  Of course, this movie is well deserving of HARSH.  Let’s hope the March movies are better than the batch given to us this February.