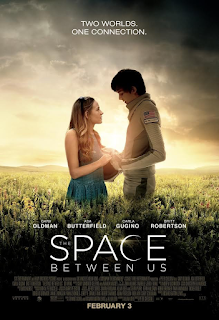 One of the worst things to be said about a movie is that it doesn’t grab you.  The Space Between Us is just such a movie. The characters are not particularly interesting. The plot is predictable.  (I knew who the unknown father was very early in the movie.) The science is not fun as it was in The Martian. Yes, this is a sappy, coming-of-age love story but give us something new!

Gary Oldman as a histrionic Richard Branson-like character, and Carla Gugino, as a mother surrogate just mailed in their performances.  Asa Butterfield, as the child born on Mars, was just OK.   Britt Robertson, as the love interest, was the best of the bunch, but that is faint praise.

This movie does have an interesting concept–a child born in outer space and how he deals with resulting issues.  However, in this case, the director never makes us care.

Conclusion–this is not the movie to take your date to on Valentine’s Day unless you want to catch up on a nap.  For that, this movie has great promise!