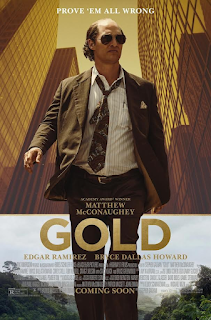 Gold by any other name is Greed.  Not even remotely close to being as good as The Big Short, or even The Wolf of Wall Street, Gold attempts to explain the downfall of the Washoe Company. Washoe reportedly found lots of gold but it was a scam. Somewhat like this movie.

For those of you who saw the latest Batman, it was filmed almost completely in darkness, deliberately so.  Much of this movie was shot in a similar fashion, presumably to suggest the dark tone of the movie.  In any case, for my $8.50, I would like to see what’s going on.  Art does not necessarily mean darkness.

Like Matthew McConaughey’s additional 40 pounds, Gold is weighted down by its script, slow and pondering.  His added weight and multiple underwear shots will not win him any Fruit of the Loom commercials anytime soon.  Like Florence Foster Jenkins screeching, they will be difficult to erase from your memory.

Finally, when a movie is loosely based on facts, TMJ would like it to somewhat resemble the truth. The ending of Gold appears to have no connection to the truth at all.  Did they think no one would notice?

Once again, my guess is that the actual facts of the original scandal would have been much more interesting than this muddled mess of a movie.  It will not do well at the box office so it should be available at home soon.  Even then, remember I warned you about the underwear shots.