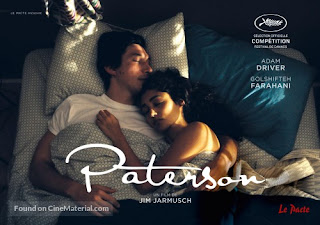 Paterson is the absolute truth that critics are just messing with us.  As a certain unnamed politician questions the accuracy of polling, this Rotten Tomatoes score causes me to question the ability of Rotten Tomatoes to compile critics’ opinions. Surely they made a mistake!  Friends don’t let friends pay for movies like this!

Paterson is a would-be poet bus driver from Paterson, New Jersey married to a free spirit artist who likes black and white.  Like Seinfeld, it is a show about nothing.  One critic used the word “mundane”
but it is even less than that. The highlight of the movie was Passaic Falls but you can only watch a waterfall for so long.  I have never been to Paterson and this movie would not cause me to visit. Really, the only other memorable part of the movie is the dog pushing over a mailbox.  Pretty exciting stuff, huh?

After seeing Adam Driver in a small role in Silence, I was looking forward to his performance.  Let me tell you, he knows how to play a nice, sweet, dull bus driver.  He nailed it! But no one wants to see a dull bus driver.  Golshifteh Farani is also sweet as a slightly wacky cupcake maker but what was the point?

If you want to expose yourself to complete and utter boredom, I suggest you wait to see this on Amazon.  Apparently Amazon Studios had something to do with this fiasco.

On the positive side, the Esquire Theatre is close to a favorite restaurant of ours when in the Clifton area.  Biagio’s Bistro, introduced to us by Neal and Barbara Bronson, is only a few doors down from the theater.  Bon appetit!