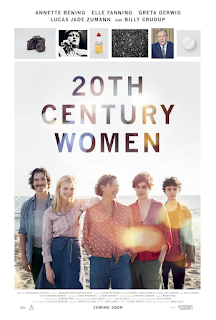 As many of you may know by now, this was supposed to be a review of Founder starring Michael Keaton.  I dutifully purchased my ticket yesterday at 5:00PM and was looking forward to seeing how the McDonalds empire was created.  Imagine my surprise when I arrived at the theater door only to find that a different movie was showing in MY theater.  Upon inquiring, Regal advised that it would not be shown tonight, tomorrow, or ever.  (Did McDonalds threaten to take away their cheeseburger franchise?)  Perturbed, I agreed to go see 20th Century Women and they agreed to give me four free tickets.  Silly me.  I thought the tix were to compensate me for the aggravation of not seeing the intended movie.  Now I know the tix were to apologize for causing me to see 20th Century Women.

Given the high Rotten Tomatoes score, I read several reviews to see what I missed.  I remain unconvinced.  As near as I can tell, this director made some indie movie some years ago, and the critics are still fawning over him.  This movie has no point and goes nowhere.  Sure Annette Bening is a quality actress but she needs to do something other than smoke.  I just don’t get Greta Gerwig. Gerwig, Elle Fanning and Billy Crudup were supposed to help parent Bening’s teenage son.  Yet Crudup and the son were rarely in the same scene.  To make the 15 year old boy into a man, Gerwig provides feminist sexuality books to him.  Fanning sleeps with him every night (no sex though) and tells him of her sexual escapades.  If the above makes little sense, it is not my fault that the movie made little sense.  No believable 20th Century mother would turn her son over to these three!

The critics liked Manchester by the Sea.  It left me cold.  This movie will leave you in the cold!  My goal is to warn you and save you sitting through a slow movie.  The first half of this movie was so slow that to call it tortoise-like would be a disservice to turtles.  Of the seven of us in the theater, two left after about 15 minutes.  If only I had the sense to follow.  Watching cold drizzle would have been less painful.