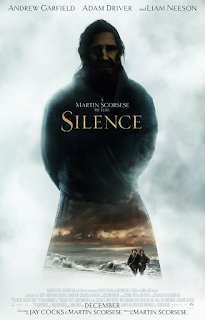 Martin Scorsese is a genius movie-maker!  All movie lovers will appreciate the art of his direction. He has wanted to make this movie for 28 years and he has put his heart and soul into it.  I loved it!
Silence is ostensibly about priests trying to maintain a Christian foothold in Japan in the 1600’s while the Japanese are just as fervently trying to eradicate it.  But the film is just as much about psychological warfare.  The Japanese realized that killing priests just made them martyrs, so it was crucial that the priests renounce their faith.  Sound familiar?  The continual efforts to wear down the priest was no less sophisticated than we saw in Nazi Germany or in Communist Soviet Union.

Man’s inhumanity to man, i.e. torture, is always difficult to watch.  Just when you think you have seen every way possible to torture and kill, new methods are shown.  Imagine how Father Rodrigues
(portrayed very well by Andrew Garfield-maybe his best work to date) felt as he was given the choice to spare lives and suffering by trampling on a likeness of Jesus, or remain faithful and watch his followers die.

Liam Neeson as the mentor priest, who years before struggled with the same issue, was terrific as were Issei Ogata as the Inquisitor and Tadanobu Asano as the Interpreter.  But I would like to have seen more of Adam Driver as the companion priest who really inhabited his role.  And did I mention the beautiful Japanese landscape?

Not everyone will like this movie.  At 2 hours and 41 minutes, it could easily have been edited by 30 minutes.  But, as his labor of love, Scorsese can be forgiven his excesses.  He wants you to think how you would react if you were the “Padre.”  If you were a worshiper, how would you handle the constant fear of persecution?  If you are looking for a lighthearted comedy, look somewhere else.  If you are looking for a movie about faith, and the attempt to destroy it, this movie is thought provoking.  Your decision!