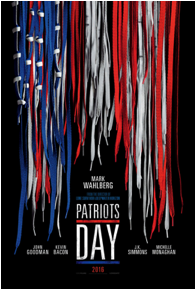 #BostonStrong  —  Patriots Day is not a great movie, but it is  a great story.  We know the beginning and the end of the tragic day; we now are able to fill in the faces and details contained therein.  I never understand why writers feel they have to invent characters (Mark Wahlberg as Sgt. Tommy Saunders).  Surely the heroes, victims, and villains are compelling enough without the fiction.  In this case, the interview with Tsarnaev’s wife was both chilling and fascinating at the same time.  The attack on the M.I.T. security officer and the shootout with the Tsarnaevs will not soon be forgotten.
Apollo 13 was great without the added fluff.  As Jack Webb (Dragnet will have to be explained to those under 55) would say “Just the facts, ma’am!”

While I am being critical of the movie, I will also point out that the director makes too much use of hand held cameras.  While he attempts to maintain tension, many will find such device herky-jerky and distracting.  (Brooke Logsdon pointed out that I needed to see more suspenseful movies.  She will be happy to hear that FitBit records me as awake the entire flick.  Hurray for me!)

Like Wahlberg, Michelle Monaghan, as his movie wife, was unnecessary.  John Goodman as Boston Police Commisssioner and J.K. Simmons as Watertown Police Sgt. are always fun to watch.  As someone who has been part of the decision making process on the appropriate time to release sensitive investigative information, Kevin Bacon’s performance properly conveyed the conflicting emotions experienced by those in charge.

Bottom line — You will see some body parts and disturbing images associated with a bombing.  You will become involved in this movie.  It is an attack on our country and your patriotism will stir. You will be educated.  And, most importantly, you will be entertained.  And that, ladies and gentlemen, is why we go to the movies.  Not a perfect movie, but a solid one.