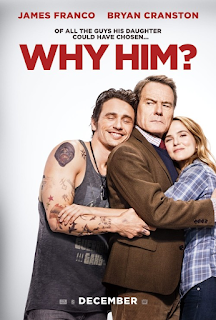 Judge Michael Powell, a learned jurist if there ever was one, likes to tell the story about suitors coming to his door to date his daughters.  He would ask them two questions.  “Do you want a beer? Do you want a cigarette?”  If they said “YES” to either question, he would say “Get the heck out of here!”  That pretty much sums up the plot for Why Him?

As I thought about setting up a movie blog, I often wondered how to review a movie of this type. Many older comedians think it is intellectually lazy to try to get laughs with one profanity after another.  And, I agree.  On the other hand, this is what seems to pass for humor these days from Hollywood and we are stuck with it.  Suffice it to say, if you like Saturday Night Live, you will probably enjoy this movie.

Like all raunchy comedies, there are some hilarious scenes.  Ned Cranston (Bryan Cranston) unable to operate a Japanese toilet which is then remotely operated by Gustav (Keegan-Michael Key) is a very funny moment.  Justine (Kaley Cuoco) as a Siri-like helpmate is a pleasant diversion.

The consensus of the critics is that the movie is solidly cast.  Cranston, Megan Mullally (wife), Cedric the Entertainer (friend), and Zoey Duetch (daughter) all are fun to watch.  Key was outstanding.  James Franco (the boyfriend) was over the top, but presumably, that was the point!

Perhaps the most pleasant surprise of the movie was the appearance of the music icons KISS. They were a wonderful contrast to the suburban Michiganders, at least until they gave them dialogue.  As actors, they need to remain musicians.

Conclusion:  This movie is better than the comedies you will see on TV but that may be faint praise.
Children must be long to bed before you turn on this flick.  My advice is to wait for Netflix.  There is a reason this movie was not given widespread release until January.  It should be on the small screen very shortly.